There is a lot of speculation in the craft beer community about Wisconsin Brewing Company (WBC) and what they will be bringing to the increasingly crowded craft beer marketplace.

During my hardhat tour a few weeks ago, Marketing Coordinator Jessica Schulter didn’t give away much information about branding strategies saying, “We don’t want to be pigeon-holed…it is basically whatever Kirby feels like brewing really.”

While longtime Capital Brewery Brewmaster Kirby Nelson is known for his world class Dopplebocks and strong German-style brewing background, Schulter thinks that Nelson will embrace the freedom in his new role and produce some really great beers.

Nelson recently brewed a 10-barrel test batch at the Great Dane nof what will eventually be WBC’s American IPA. While WBC had expectations that the beer would sell out in a few weeks, it in fact shocked them selling out in just a few days. The American IPA along with a Golden Amber Lager released earlier are the first two sneak-peeks the public has gotten an opportunity to try.

Currently, there is a tasting set for their third trial beer which will be released at the Great Dane and the Vintage Brewing Company on Tuesday July 16th, but WBC isn’t saying what style of beer it is yet, but they are certainly building intrigue amongst craft beer seekers which is clearly part of their marketing strategy. 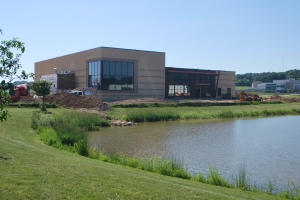 I asked Schulter what the risks were in opening a multimillion dollar brewery capable of producing 100,000 barrels of beer annually right out of the gate and she seemed more than confident that WBC will be successful.

“We’ve got guys who have been in the brewing industry since they legally could be,” said Schulter referring to Nelson and former Capital Brewery President Carl Nolen. “Think about it…Wisconsin…Beer…Perfect! How could it go wrong?”

Schulter also says that with the new brewery being a little more automated, Nelson will have more time to be the face of the brewery.

“I wish we could have Kirby give every tour,” said Schulter. “He is so knowledgeable and passionate about beer and the beer business.”

The brewery plans to give tours of their Verona complex which features a Wisconsin-made brewhouse ideally on November 1st (which also happens to be Nelson’s birthday). Until then, the beer-curious can stay tuned for information at wisconsinbrewingcompany.com.